Charged with Unlawful Possession of a Firearm? 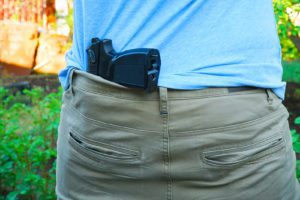 The Second Amendment of the United States Constitution and Article 1 Section 23 of the Texas Constitution contain our rights with regard to the right to bear arms. This inalienable right to possess and own firearms in Texas is held in high regard. Many laws have been passed to advance this right, but many laws have been passed to restrict your right to possess or own a firearm.

Unlawful possession of a firearm in Texas is found in Chapter 46 in the Texas Penal Code. It is important to know the law with regard to when and if an individual can possess or own a firearm if they have been convicted of a felony in Texas. Texans often take this right for granted and can potentially be faced with serious fines or even imprisonment for a violation of this law.

Criminal Defense Attorney for Unlawful Possession of a Firearm Arrests in Fort Worth, TX

Were you arrested for any kind of alleged weapons crime in the greater DFW area? Do not say anything to authorities without legal representation. Contact Gebhardt and Eppes, PLLC as soon as possible.

Steve Gebhardt and Brian Eppes are criminal defense lawyers in Fort Worth who represent clients charged with weapons charges in such communities as Tarrant County, Parker County, and Johnson County, including Fort Worth, Weatherford, Arlington, Cleburne, and many others. Call 817-502-3600 today to receive a free initial consultation that will allow our attorneys to provide an honest and thorough evaluation of your case.

Overview of Unlawful Possession of a Firearm Crimes in Tarrant County

Unlawful Possession of a Firearm in Texas

a)  A person who has been convicted of a felony commits an offense if he possesses a firearm:

2)  After the period described above at any location other than the premises at which the person resides.

b)  A person who has been convicted of an offense under section 22.01 (Assault Bodily Injury) punishable as a Class A misdemeanor and involving a member of the person’s family or household commits an offense if he possesses a firearm before the fifth anniversary of the later of:

1)  The date of the person’s release from confinement following conviction of the misdemeanor; or

2)  The date of the person’s release from community supervision following conviction for the misdemeanor.

Under Texas law, not federal law, a convicted felon may possess a firearm at their residence as long as 5 years have elapsed from the person’s release from confinement or release from supervision, parole, or mandatory supervision, whichever date is later. Under the current law in Texas, a convicted felon may never possess a firearm away from their residence. There is no travelling defense that would apply to a felon possessing a firearm.

An individual who has been convicted of a misdemeanor assault involving family violence may possess a firearm once five years have lapsed from the release of confinement or once their probation is complete. This type of probation does not include a deferred adjudication under this code section.

Firearm is defined as any device designed, made, or adapted to expel a projectile through a barrel by using the energy generated by an explosion or burning substance or any device readily convertible to that use. A firearm does not include a firearm that may have, as an integral part, a folding knife blade or other characteristics of weapons made illegal by this chapter and that is:

a)  An antique or curio firearm manufactured before 1899; or

b)  A replica of an antique or curio firearm manufactured before 1899, but only if the replica does not use rim fire or center fire ammunition.

What are the consequences for Unlawful Possession of a Firearm in Texas?

The penalty for an offense under Texas Penal Code Section 46.04 is a third-degree felony. The possible penalty for a third-degree felony is up to a $10,000 fine and up to 10 years in prison. If the prior conviction was for an assault involving family violence as described above, the offense would be charged as a class A misdemeanor. If charged under this section, a person is facing up to a $4,000 fine and up to one (1) year in the County Jail.

National Rifle Association (NRA)  – The NRA is a nonprofit organization that advocates for individuals’ rights to carry and own firearms. The NRA was founded in 1871 and has been an active political force in Texas and across the United States in strengthening one’s rights to own a firearm. The NRA plays an active role in education and training for those interested in possessing or owning a firearm.

Bureau of Alcohol, Tobacco, Firearms and Explosives (ATF) — The ATF is a law enforcement agency under the umbrella of the United States Department of Justice. The goal of the organization is to be a watchdog against criminal organizations and the illegal trafficking and use of firearms, explosives, and terrorism. The agency does provide training and research in the area of firearms and explosives. The ATF also investigates and targets those involved in the traffic of illicit alcohol and contraband tobacco trade.

If you were arrested in the DFW area for any kind of alleged firearms or weapons crime, it will be in your best interest to immediately retain legal counsel. Gebhardt and Eppes, PLLC, can fight to possibly get your criminal charges reduced or dismissed.

Fort Worth criminal defense attorneys Steve Gebhardt and Brian Eppes aggressively defend individuals in Cleburne, Fort Worth, Weatherford, Arlington, and several other surrounding areas of Tarrant County, Parker County, and Johnson County. They can review your case and help you understand all of your legal options when you call 817-502-3600 or complete an online form to schedule a free, confidential consultation.