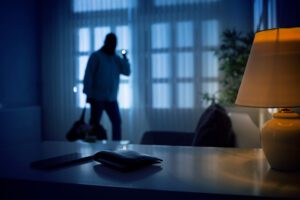 More often than not, a burglary usually occurs when the homeowner is not present. This makes sense of course because the risk of being caught is greatly reduced. Prior to surveillance cameras at residences a burglary investigation often went nowhere unless the subject was witnessed or caught in the act. Often times, the police were left with making assumptions about an individual having committed a burglary when they were in recent unexplained possession of stolen property at a pawn shop. In fact, there is an inference in the law that exclusive and unexplained possession of property recently stolen in a burglary supports the idea that the individual in such possession is responsible for committing the burglary. However, with Ring cameras and the like, police are much more successful in solving and prosecuting a run of the mill burglary.

Burglary are most commonly associated with theft, but the law specifically provides various avenues that a prosecutor has to be successful in prosecuting an individual for burglary. There are various types of burglaries under the law, however this section of the website will revolve around a burglary of a residence.

Attorney for Burglary Arrests in Fort Worth, TX

If you were recently arrested for burglary anywhere in the DFW area, it will be in your best interest to immediately retain legal counsel. Gebhardt & Eppes, PLLC defends clients accused of burglary offenses in Arlington, Weatherford, Fort Worth, Cleburne, and many other surrounding areas of Tarrant County, Parker County, and Johnson County.

Townsend, Gebhardt & Eppes, PLLC are experienced criminal defense lawyers in Fort Worth who can help you achieve the most favorable resolution to your case with the fewest possible penalties. Call (817) 502-3600 today to have our attorneys provide an honest and thorough evaluation of your case during a free, confidential consultation.

Under Texas Penal Code § 30.02, A person commits a burglary if, without the effective consent of the owner, the person:

“Owner” as contained within this section is a person who has a “greater right to possession” of the property than the individual accused of the burglary. This concept of greater right to possession is rarely at issue in the vast majority of burglaries the police investigate, however it can become critical to the prosecution’s case in roommate and ex-roommate type situations.

If the State police or prosecutors believe an individual entered the residence, and had the intent to commit a theft but was unsuccessful in that theft you can still be prosecuted for burglary in the state of Texas.

As mentioned earlier most people associate burglary with theft of property, but the law clears up this misconception. A burglary can be committed in any number of ways b/c of the catch all “intent to commit a felony”. In almost 100% of burglaries that allege the intent to commit a felony or assault the homeowner or is present. It would be extremely difficult to prove this element without the homeowner being present.

Burglary with intent to commit a felony are often sensationalized by the media and the press releases that District Attorney’s offices produce. The concept of a “home invasion” is one of the scariest things someone may have to suffer through. Due to the media grabbing headlines these cases often take, prosecutors often take a hard stance on prosecuting these crimes. If you or a loved one is arrested or being investigated for burglary in Tarrant, Parker or Johnson County Texas, it is important to contact one of the experienced criminal defense lawyers with Gebhardt and Eppes, pllc.

Penalties and enhancements associated with a burglary

The lowest level felony offense for burglary is a burglary of a building. This makes sense due to the human element is somewhat removed. Very rarely is an individual in a building with it is broken into. If there is an individual in a building or commercial property we usually see those prosecuted as a robbery or aggravated robbery as opposed to a burglary. With that said a burglary of a building is a felony offense. Burglary of a building carries with it a range of punishment of no less than 180 days up to 2 years in the State Jail facility and a fine not to exceed $10,000. State Jail time is served on a day for day basis. Which means, if you are sentenced to 180 days you will serve 180 days in State Jail. There is no parole, or early release, like there is for a prison sentence. Recently there has been a change to this in the for of the Diligent Participation Program through State Jail. A Judge has the ability to shave 20% of an individual’s sentence in the State Jail depending on the inmate’s behavior and participation in programs and credits offered. This however is discretionary and in no way a guarantee.

Burglary of a Habitation with intent to commit theft or assault is classified as a second-degree felony in the State of Texas. If an individual is charged they would be facing no less than 2 years up to 20 years in the Institutional Division of the Texas Department of Corrections or TDC (prison) and be subject to a fine not to exceed $10,000.

Burglary with intent to commit a felony is classified as a first-degree felony in the State of Texas. If an individual is charged under this section they could be facing no less than 5 years up to 99 years of life in the prison and a fine not to exceed $10,000. There are additional consequences outside of the increased range of punishment that one faces when charged with a first-degree burglary. Depending on the type of felony alleged can affect how long an individual might remain in prison awaiting parole. For example, in an individual is accused of breaking into another’s home with the intent to commit sexual assault they could be looking at serving more time under Texas Code of Criminal Procedure § 42A.054. Parole is the early release from a prison facility in Texas. Parole is awarded to an individual for any number of reasons. An individual convicted and sentenced to prison under this section would not become eligible for parole until half of the sentence is served without consideration for good conduct time. Additionally one would have to register as a sex offender if they were prosecuted with burglary with intent to commit a sexually related offense.

Were you arrested in Fort Worth or Tarrant, Parker or Johnson County area for an alleged burglary offense? Do not say anything to authorities without legal representation. Contact Gebhardt & Eppes, PLLC as soon as possible.

Fort Worth criminal defense attorneys Townsend, Gebhardt & Eppes, PLLC represent individuals all over Tarrant County, Parker County, and Johnson County, including Arlington, Cleburne, Fort Worth, Weatherford, and several others. They can review your case and answer all of your legal questions as soon as you call (817) 502-3600 or complete an online form to take advantage of a free initial consultation.