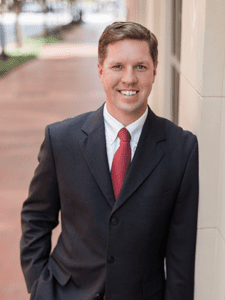 Brian S. Eppes is a former Prosecutor with the Tarrant County District Attorney’s Office. As an Assistant District Attorney, he tried a broad range of both felony and misdemeanor cases. Brian also served as the Legislative Liaison for the District Attorney. He worked closely with members of the Texas Legislature and helped write several laws. Brian has given many legislative presentations to lawyers across the state. Prior to joining the District Attorney’s Office, Brian worked at a boutique tax and estate planning firm in Fort Worth. He also served as the Director of the White House Gift Office for President George W. Bush, where he managed all gifts given to the President, First Lady, and staff. Brian’s unique background in both the political and legal fields allows him to advise clients in many areas of the law.

Brian S. Eppes was raised in Arlington, Texas. He graduated from Texas A&M University in 2002 with a degree in Political Science. He received his law degree from South Texas College of Law in 2005 and was awarded the Dean’s Merit Scholarship. Brian lives in Aledo with his wife, two children, and dog. He enjoys spending time with his family and attends Christ Chapel Bible Church – West Campus.